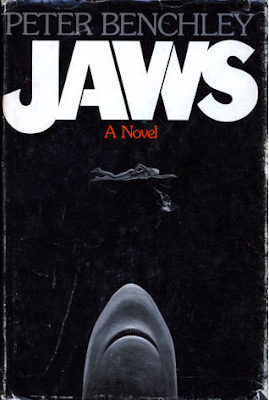 Happy Monday everyone. This week I read Jaws. Most of you have probably seen the movie depiction of this book that came out a long time ago. I didn't know that it was based on a book until I got a recommendation to read it online. And even though I am not a big fan of watching movies like that I do love reading thrillers. So after searching for it online I finally found it on Kobo and decided to give it a read.
Before reading it I figured it would just be exactly the same as the movie. It wasn't until I did some research that I found that the book actually came out before the movie and it was based on it. Once I found that out I wasn't sure whether the book would be as good as the movie depiction of it.
For those of you who haven't seen the movie let me give you an idea what the book it about:

In the small town of Amity the people thrive on the summer months when the tourists come from all over America to play on their magnificent beaches. Without these tourists the town wouldn't be able to survive. But this summer something is threatening the people.
When a young girl goes out for a midnight swim and doesn't return, Chief Brody is called in to investigate. At first he understands that it is a shark attack. His first move is to close the beaches until he can be sure what kind of danger they are dealing with. But the mayor demands that he keep them open despite the danger, at the risk of his job.
Soon two more people die because of a shark attack leading the town to believe that a killer shark is on the loose. The beaches are forced closed once again but it becomes apparent that the shark isn't going away.
With nowhere else to turn Brody and a fish expert the town brought in to assist hire Quint, a fisherman with a charter boat and a reputation for being brutal on the waters. But out at sea it is an entirely different game. The shark is smarter than anyone could have believed. Now it is a battle between an unstoppable force of nature and a man willing to do anything to protect the people in his town.

First thing I noticed about the book is that there is a lot less shark than in the movies. There is a lot more family problems and friend problems going on that take up chapters instead of content relating to the shark. This may be one of those times where the movie is more interesting than the book it was based on.
Some of the characters weren't too bad to read about. I liked Brody as a character because he struggled with maintaining friendships, doing his job, and knowing the truth about what is going on in his town.
The book itself has an old fashioned feel to it. The author doesn't have the strongest voice but the story still flows nicely from the changing points of view.
Plot: B
Pace: B-
Characters: B-
Ending: B+
Overall Rating: 3 out of 5 stars
Have a great day everyone and happy reading!
- K
Book Horror Jaws ksteenbookreview Peter Benchley Review Shark Summer Teen thriller