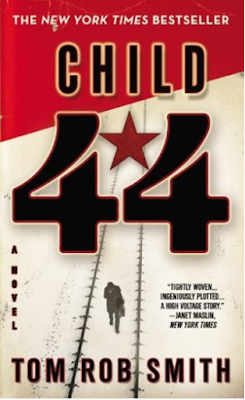 Hey everyone, I hope you're having a happy Monday. We're now into December and the cold weather is slowly starting to effect us Canadians. Thankfully for the last couple of weeks the temperature has been hanging around -4, which is pretty warm for this time of year. The windchill is another thing altogether.
A couple weeks ago I told my friend that I was having trouble finding new and interesting books to read. She leant me a couple of books that she enjoyed to get me through to the new year. This was one of those books.
Her description of the book was that it was about a murder in the heart of Stalin's communist Russia. With not much more to go on I sat down to give it a read. It took me about three days to finish.
Let me tell you a bit about it:

Leo is a high ranking officer of the MGB, Russia's military police under Stalin's rule. His job is to investigate any implication of traitors to the revolution. Once he finds someone he turns them in, they are interrogated by experts, and then they are either executed or sent to the Gulags to work out their prison sentence.
One day he is sent to put down the talk that the death of a young boy on the railroad tracks was a murder. When the family insists that there were sightings of the boy with a man leading him towards the tracks he shuts them up and returns to hunting for rebels.
A rebel he tracks down and has to interrogate might just change his mind about what he knows. Quickly his career and life begins to go down hill. After being asked to investigate his wife for accusations of being a rebel he is forced to choose between the woman he has been with and his life with the MGB.
His decision will get him sent to the villages outside of Moscow after being demoted. There he will find more children killed in similar ways as the boy on the train tracks. Without permission from the higher ups he will start to investigate on his own. This is potentially life threatening for him since it would be considered to be a rebel move to go against the orders of his country.
With the killer and the MGB closing in Leo is in a race against the clock to stop the killer from taking the lives of anymore children. But his decisions will put the lives of him and everyone he loves in danger.

The first part of the book was boring. It's a lot of boring history establishing the feel for the story. So nothing really happens until about halfway through the book. And the rest of the book is incredibly frustrating because of the way the country operated at the time.
But I would say that the last part of the book, the most interesting part, is worth reading the boring stuff for. It has an exciting and satisfying ending, which is nice after the depressing story the book explores.
Setting: B+
Plot: B-
Pace: C+
Character: B-
Ending: B+
Overall Rating: 3 out of 5 stars
Have a great day everyone and happy reading!
- K
Book child 44 cold Death ksteenbookreview murder mystery Review russia Teen thriller tom rob smith War winter