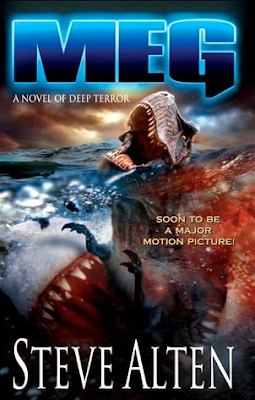 Hey everyone, this is coming at you pretty late. I had ordered a crap ton of books a week ago with the hopes that they would come in before today but apparently they only got shipped out today. Just what I was hoping for. Whatever.
Since mail comes later in our apartment I was left with nothing to read that I could finish by the end of today so I decided to go back to an old book that I started reading but stopped for no reason.
I started reading this book because since I was a kid I have loved ancients sharks and this was a well rated book fitting the bill. For some reason it is really hard to find this book at any book store and ordering it online only shows up the rest of the books in the series so I had to get the ebook version.
And since this book is hard to find I will tell you all about it!

Dr. Jonas is a man who has lost so much in his life. After he caused an accident that took the life of two people he lost his credibility and sunk into a depression. His wife is plotting to ruin his life further, his friend is helping his wife, and the whole world thinks that he is a crack-pot.
When several units exploring the deepest part of the ocean are mysteriously destroyed Jonas is called back by an old friend to help find the reason behind it. Jonas suits up to get ready to go back into the trench for the first time in many years, convincing himself the horrors he saw years ago was just his imagination from stress.
But the monster he saw was very real. And now it is coming back to haunt him when he is at his most vulnerable.
A monster has been released onto the world that evolution had kept locked below for millions of years. The world is now in danger and Jonas is in a rush to stop the shark before it kills off all of the species in the water and all the humans who venture off the beach.

All in all a pretty good book. There was a lot of situations where they showed the shark hunting and the humans hunting the shark but there wasn't a lot of down time to have character development. Not a fault though. Just making an observation.
Characters: B-
Plot: B+
Setting: B-
Pace: B
Ending: A-
Overall Rating: 3 out of 5 stars.
Have a great day everyone and happy reading!
- K
adventure Book Dinosaurs Horror ksteenbookreview MEG Review Shark Steve Alten Teen thriller