The Hunt for Red October by Tom Clancy 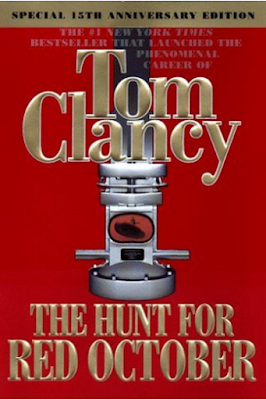 The Hunt for Red October is the 4th book in a series but was the first to be released. It is recommended that it is the first book that should be read to fully understand the series. It is also the book that made Tom Clancy famous. It was later adapted into a movie that is still seen as a popular title years later.
Going into this book I didn't know what to expect. I didn't really want to get it at first but because it was so highly rated and recommended I thought I might as well give it a shot. I can tell right away from reading it that it is much older than a lot of the books I am reading at the moment. The style of writing has a weak authors voice that I am used to when reading older books.
Let me tell you a bit about it:

Set during the cold war the Red October is a Soviet Nuclear Submarine tasked with making a secret voyage to Cuba. Their mission is to test out their stealth by making it to their destination without being detected by the United States. But the people running the sub have something else in mind.
At the CIA headquarters agents have information that may lead them to believe that the crew of Red October have betrayed their mother country and are planning on defecting to the USA. They have to decide whether or not to accept these men should they come and what they should do should their nuclear sub come into their hands.
See from the point of view of the Red October, the CIA, and those involved in trying to locate the Sub before it reaches American soil. The CIA has the challenge of finding a tiny sub in a vast ocean  in a race against the Soviets to find it first. The Red October has problems of its own while dealing with the inner threat of a possible traitor on board. With someone sabotaging their voyage it is a question of whether to sub will ever make it to its destination and if either side will ever be able to find it.

Honestly, I expected more of this book. It was highly recommended on several platforms as well as a well praised movie. I found it hard to read even a couple of pages at a time because it just felt like nothing was happening. It kept switching from location to location with the same mission being followed "Find Red October, escape the Russians, Tell no one, blah blah blah."
It took me twice as long to read this book than usual.
Story: C+
Plot: B
Characters: B+
Setting: B
Ending: B-
Overall Rating: 2.5 stars out of 5 stars
Have a great day everyone and happy reading!
- K
Book ksteenbookreview mystery Review Teen the hunt for red october thriller tom clancy War