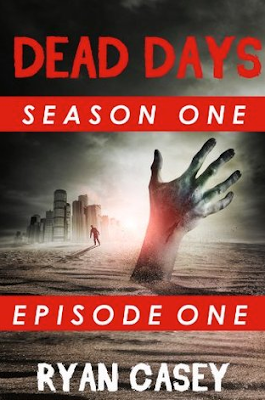 Hey everyone I hope everyone had a great holiday season and is looking forward to returning to their everyday lives... I know, I'm not either. But now we have hopefully all caught up on well needed sleep and have had a lot of books to read.
Last night I decided it was time I actually read a book before the review today. I know; bad. But this is a quick read with a lot of details. I can certainly see why this is meant to be a series of episodes in future books.
This book is more like the first in a series of short stories than an actual book.
Let me tell you a bit about it:

Riley is having a pretty bad day. First: he didn't get the job he was hoping for. Second: He lied to his grandma, the only person he has in his life, about getting the job. Third: Someone has eaten his neighbour....
When he comes home and finds the body of his neighbour lying in the parking garage he knows something is wrong. His worst worst thoughts are confirmed when he sees the body come to life again and rip itself in half trying to get to him.
Him and his friend now have a big problem. They are stuck in their apartment building while the dead rage a war outside their windows. Riley wants desperately to get to his grandmother before the dead do, even though it seems like it may be too late.
With the unlikely help of another neighbour with a gun they believe they have a plan to get out of the city, or whatever is left of it.

Normally I have problems reading stories as short as this one is. For once, though, this one was different. Despite being short, and knowing it would be short, I still found it enjoyable. The detail in writing was perfect and the characters were believable.
This is one of those books that could have taken off into one large book with a great story if the author hadn't chosen to separate the books into different episodes.
That being said, this book was free in the Kobo store so to read the rest of the story I will need to purchase the other books in the series. I might just do that.
I would give this book a 4 out of 5 star rating.
Have a great day everyone and happy reading!
- K
Book Dead Dead Days ksteenbookreview Review Ryan Casey Teen Zombie