The Boy Who Drew Monsters by Keith Donohue 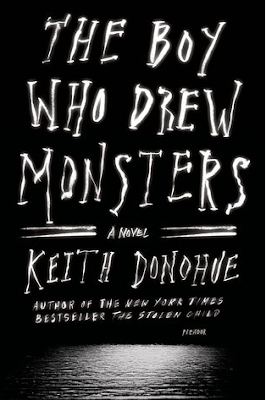 Sometimes when you start reading a book by the second chapter you already have a rating in mind. In many cases that rating will stay the same until the ending where the outcome will determine whether or not it loses a star, or gains a star. This book was one of those instances where the ending gained it a star.
This book was something that I had seen many times when I went to the bookstore. Since I see it all the time and it is always in a well displayed section I thought I might as well give it a read.
First thoughts of the book; the beginning had a slow start with a lot of questions and very little answers. The story switches between 4 different points of view, which I also am not a huge fan of.
Thoughts by the ending; not going to lie, the ending messed me up a bit. I love a book where there is a good twist at the end that makes you see the whole book in a different way. This earns this book one extra star.
Holly is at her last straw. Her son has been more than she can handle for years. When he strikes out at her one morning she feels herself starting to decline. Little does she know that the incedent is only the beginning of her troubles. Soon she begins hearing screams coming from the water and something trying to break into her house every night. She can't sleep. Her husband doesn't believe her. She takes refuge at a local church but the stories they tell her will only drag her deeper into an old mystery.
Tim believes in his son. He knows that it has been hard for him to deal with his illness and refuses to let his wife send him away. When he starts to see a monster roaming the lands around their home he tries to prove to himself that he isn't crazy. He constantly fights to protect his son and prove to himself that monsters don't exist. He has no idea how wrong he is.
Jack Peter knows everything that is going on. Deep within his mind he avoids his parents to keep his secret. He won't go outside. He won't let anyone touch him. The only person he trusts is his friend Nick. People say Jack Peter is sick. People say that he should be sent away. He will continue to draw the monsters until everyone leaves him alone. Especially Nick,
Nick hates his life. He hates his drunken parents. But most of all he hates Jack Peter. Nick sees more than he lets on and looks into the mysterious monsters that roam around Jack Peter. When he is forced to stay with Jack Peter and his parents for a week he knows that he is going to have a bad time. He has no idea what he is in for.
Like I said before, this book messed me up. At every turn I tried to predict what was going to happen next, what was really happening, how the parents would react. And every time I would still be taken by surprise.
The author goes into great detail to keep things secret only to reveal them in the most unusual way. His writing style has a very depressing tone to it, which fits well with the plot of the story.
There are a few dialogues that don't flow as well as I would like but I don't care about the diologue. It is the internal monologue that makes the book worth reading. The characters are not afraid to think the things that would horrify most people. Each person dealing with their own situation in their own way makes everything that transpires that much more interesting. Those of you who like psychology will love this book.
I will rate this book at a 4 out of 5 stars (the 4th star coming from the ending)
Have a great day everyone and happy reading!
- K
action Book Horror Keith Donohue ksteenbookreview monster Review Teen The boy who drew monsters thriller