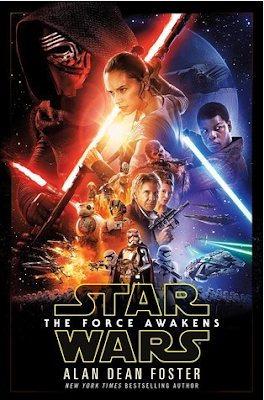 Hey everyone I hope you are all having a great Monday!  A couple weeks ago I decided that I would finally watch the new Star Wars, which came out in theatres long enough ago that it is coming out on DVD. And I truly enjoyed the movie. After finishing it I went straight to Kobo.com and bought the book (as well as reading the original script to the movie). Since I am a bit behind on my reading due to work and personal matters I thought I would do a quick review for this book.
The book is a novelization of the movie but I have often read novelizations in the past and they have been pretty good. I found that in this book there was more information given to stories than was portrayed in the movie. This is probably because Alan Dean Foster read the original script (see, my crazy is more research than anything else) where he would have seen the stories that were cut from the final product. There is also something about being able to see the inner thinkings of each character that adds to the overall storyline.
But let me tell you a bit about the book if you haven't seen the movie yet:

Since the original movies the Empire has fallen but a new, more devastating power has risen from its ashes. The rebels, led by Princess Leia, are fighting to keep control but with Luke Skywalker missing there are no Jedi's to fight back. But there is still hope. A member of the rebels has located what he believes to be part of a map leading to where Luke is.
But before he is able to get the piece of the map back to his friends he is captured by the mysterious Kylo Ren who is a strong user of the force for the Dark Side. The map piece is sent away by the rebels trusty droid BB-8.
Kylo is able to get information about the droid from the rebel and an army is sent out to retrieve it. The rebel man doesn't think he will ever be able to escape the hands of the enemy but with help from an unexpected place he is able to head back towards the planet to try to find his droid before the enemy.
On that planet a young drifter girl named Rey scavenges to survive. She comes across BB-8 in the desert by her home and agrees to take him in until she can figure out where he needs to go. Though she lives in poverty and barely gets by she is reluctant to leave the planet despite her skills as a pilot and technical knowledge.
But when the enemy targets her because of her relation to the droid she will have no choice but to team up with an ex-storm trooper to try to get BB-8 to the rebels in one piece. On the journey Rey will discover the power she holds within her. Her friends will find the courage they need to fight back against the ultimate evil. And the enemy will fight against themselves to keep control of their emotions and their power.

I really enjoyed this book, especially the parts with Kylo Ren. I love his moral issues he goes through where he fights against the light side and the dark side. Some people say he is a baby because of the fits he throws when he is mad but I find that is adds to his character that he is struggling to keep control over himself and what he has fought to make.
If you haven't seen the movie then there are great twists and betrayals that make it that much better to read for the first time. Here is my rating for it:
Plot: A-
Pace: B
Characters: A
Setting: B
Ending: A-
Overall Rating: 4 out of 5 stars
Have a great day everyone and happy reading!
- K
action adventure Alan Dean Foster Book ksteenbookreview Review science fiction space Star Wars Teen The Force Awakens