Z- Minus by Perrin Briar 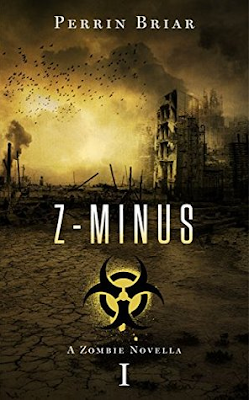 Hey everyone I hope you are having a good Monday. A few weeks ago someone reached out to me about downloading this book from Kobo or Amazon since it was free. I figured, since it was a free book, I didn't have much to lose. I checked out some of the other ratings for this book, as I normally do to get a few different opinions before forming my own, and it didn't look promising. While I always look at the lowest and highest review for the differing opinions I found it hard to find a good review.
For my own opinion I tried not to think too much about the negative things I read. The author didn't have the strongest voice and I had a problem with the dialogue since it wasn't very realistic. The story itself had promise but I found it was just another take on a popular topic. Since Zombies have become such a popular part of our culture I find an author has to have a very unique new way of presenting them to catch anyone attention in a big way.
But let me tell you what I got out of the story:

Chris is having a bad day, as most people have. He wakes up in his car, drunk from a night of heavy drinking. When he manages to get out of his car he notices that the streets around his house are abandoned and the houses are broken into.
When he goes home he finds his family dead and goes into a frenzy trying to figure out who could have done such a thing. When his family suddenly comes back from the dead he races from his house where he meets up with another survivor who tries to explain the situation to him.
Basically there are zombie's now, he doesn't understand how anyone could have missed that, and he is surprised Chris doesn't know what a zombie is. But if Chris thought his day was bad and confusing then he was in for quite the surprise.
Bitten, he realizes that he only has about 8 hours to live. The clock is ticking now and Chris has one last chance to save his youngest daughter from the horrors that are descending on his world. How can he protect her properly when he is soon to become a threat to her as well?

The chapters in the story go by the time of day and how much time Chris has to live. It was interesting that in this story it starts out telling us the ending, basically that Chris is most likely going to die since he is already bitten. But the story doesn't really go anywhere with the idea.
Chris himself was an unrealistic character. The way he goes into denial upon finding his family dead would have been better stated if he hadn't gone into the 'crazy' denial of just assuming they are sick when they are missing body parts. He was also very harsh to his undead children (before he understood what they were) making me believe that he was either an abusive father or just wasn't written properly.
Dialogue is just as important as details, setting, and story in making a good novel.
There is a second book to this series, also free I believe, but I probably won't read it. For a better break down of this book here is my thoughts of the important parts:
Setting: C
Story: C-
Characters: C-
Pace: C+
Ending: C
Overall Rating: 2 out of 5 stars.
Despite this rating I always encourage people to read books that have bad ratings. Sometimes this is the best way to understand why you love certain books and makes reading more enjoyable in the future. Always look for the good parts in books and not just the bad.
Have a great day everyone and happy reading!
- K
action Book drama Horror ksteenbookreview Perrin Briar post apocalyptic Review Teen Z-minus Zombie