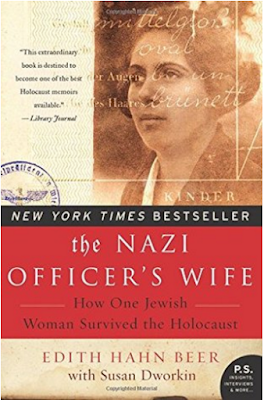 Hey everyone. I'm really sorry that I haven't posted in the last couple weeks. There is no excuse I simply didn't have a book read so I didn't do it. But now that I'm back at school I am finding the time to do some reading and have managed to get a few books read ahead of time.
This book is one that was given to me for Christmas by my roommate. She also got the book for Christmas and was reading it at the same time as me. We both agreed that this is one of the best tellings of the struggles of a woman during World War Two.
It's not a fiction book but it reads like one. This is a story told from the mouth of the woman who lived it, written out by a member of her family.
Let me tell you a bit about it:

Edith Beer is a Jewish woman who grew up in Germany during the lead up to World War Two. In her words she describes the way her life changed as Hitler came to power and how her family was torn apart before the war even started.
Unable to escape Germany due to money constraints Edith and her mother try to make the best of it. She continues pursuing love and uses all her connections outside her Ghetto to make things work for her and her mother.
When she is sent away to a work camp and is forced to stay longer she eventually breaks away from the German masters and returns to her home to try to unite with her mother. When it is apparent that she faces death by being found she has no choice but to turn to a kind German lady for help.
Through a strange set of circumstances she ends up changing her name and going undercover as a German woman named Grete. Following the advice of her German friend she gets a job as a nurse to stay out of the watchful eyes of the Nazi party soldiers.
She ends up marrying a German man working for the Nazi party who helps her maintain her cover. But living in the safety of the Germans has many strange effects on her.
She has to pretend to Hail Hitler, which makes her sick to her core. She must befriend the people who hate her 'race' to keep her cover. As the war drags on she finds it harder to tell the difference between the Jewish Edith and the German Grete.
Her troubles, though great, are only just beginning. Once you've become someone for so many years it is hard to change back. Even when the war is over Edith will struggle with new enemies to her family.
For a Jewish woman it seems the troubles are never ending.

I really loved reading this book. It is obvious that the woman writing the words of Edith is a skilled writer. It tells like fictions with the sad truth being all too real. There is a great transition between the happy little girl at the beginning of the story to the slow and steady downfall of everything she held dear.
If you are a lover of historical stories told in an interesting and captivating way I would recommend this book for you.
Plot: A
Pace: B
Setting: B-
Characters: A-
Ending: B+
Overall Rating: 4 out of 5 stars
Have a great day everyone and happy reading!
- K
action Book family ksteenbookreview life mystery Nazi Officer Review romance Teen tragedy Wife Woman World War 2