Harry Potter and the Deathly Hallows by J. K. Rowling 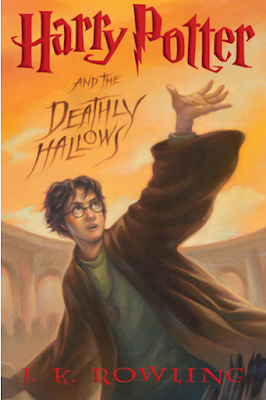 Happy Monday everyone! This is it, the last book in the Harry Potter series. By far the longest and, arguably, the best book in the series. Now that I'm finally finished I wish there were more books to read. I can happily say that I enjoyed this series.
For those who have not yet read this series, whether they had seen the movies or not, I would recommend giving this a read. Now that I've finished reading the books I would like to rewatch the movies, even though I know I don't like them as much as the books. Some people may have a different view on this, it's just the way I feel.
Let me tell you about it:

Dumbledore is dead. The Order of the Phoenix is on the run. The Ministry of Magic has been taken over by Death Eaters. But that doesn't Harry and his friends are going to give up. They finally know what they need to do to kill the Dark Lord, even if it means they can't tell anyone in their families.
Harry and the others have decided not to go back to Hogwarts this year and instead focus their attention on finding and destroying the legendary horcruxes.
Their quest will take them across the country and lead them through the most dangerous situations they have come across so far. With few people they can trust and the ministry hunting them down they are completely alone in their quest.
As the series comes to an end Harry and his friends will end up back at the place where it all started: Hogwarts. In a true good vs. evil fight the members of Dumbledore's army and the Death Eaters will fight it out to see who will win.
People will lose the ones they love and find new relationships in the finale of this series. In the end there can be only one winner, and only one can survive an encounter with the Dark Lord.

Again, great book. There's a lot less bull in this book and a lot more action. Once Harry gets away from Hogwarts and into the real magical world the story really takes off. For once there aren't people around telling Harry he isn't good enough and the bad guys aren't just bratty kids. For the first times the stakes are raised the entire book, not just near the end.
The one thing I learned was there are a lot of differences between the books and the movies (big surprise there). A lot of questions I had asked when watching the movies were finally answered. I now feel like there are no unanswered questions regarding the series, and that's a good feeling.
Plot: A
Pace: B+
Setting: A
Characters: A
Ending: A-
Overall Rating: 4 out of 5 stars
Have a great week everyone and happy reading!
- K
action adventure Book Harry Harry Potter hogwarts J. K. Rowling ksteenbookreview Potter Review romance Ron Teen Young Adult