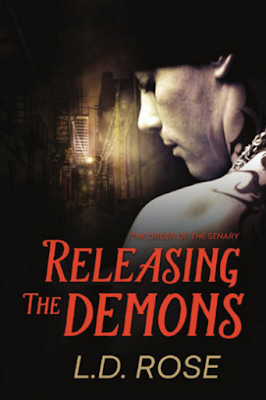 Hey everyone I hope you are having a good week. I missed last week because of work and interviews but I did actually finish a few books that I just didn't get around to writing reviews for. So expect a few in the next coming weeks, on time of course.
So this is the first book of two that the author was kind enough to send me. I will be reviewing the second one I just don't know when I'll get the time to finish it. I'll try to get it done in the next month as long as work doesn't get in the way.
It's been a while since I've read a sort of romance book with vampires in it. It was nice to read something professionally written in this genre. A lot of people can say that Twilight left a bad taste in their mouth. But this book is by no means Twilight. It is clearly aimed for the adult audience with language and sexual content.
Let me tell you a bit about it:

In our world Vampires have become known to humans. There is a police force that specifically deals with the threat rogue vampires cause to humans. Valerie is one of these people. Along with her partner she tries to solve murders related to vampires.
Outside the police there are other forces working to protect people from the vampires. Blaze is a half-vampire with the ability to set fires. After being kidnapped and tortured by an evil vampire named Cyrus he has made it his life's mission to hunt him down and kill him and all those who follow him.
After being caught up in a murder investigation Blaze and Valerie cross paths. An unlikely alliance is formed between the half vampires and the humans out to stop their kind. Cyrus is back and is intent on ruining Blaze's life once again. The race is on for Blaze and his brothers to find Cyrus and stop him and his followers from going on a killing spree. But Cyrus is only just beginning. And Valerie and Blaze and directly in his path.

I enjoyed reading this book. The characters were well written and it is easy to see the separation between each character and the author, so that each character has their own unique personality. The world was so close to being the world we all live in that it was easy to get into the story and the setting. If you are ready for a good vampire romance this is a good book to check out.
Plot: A-
Pace: B+
Setting: B
Characters: A
Ending: B
Overall Rating: 4 out of 5 stars
Have a great day everyone and happy reading!
- K
action Amazon Book fire ksteenbookreview L. D. Rose Releasing the demons Review romance Teen Vampires