Underneath: A Merfolk Tale by M. N. Arzu 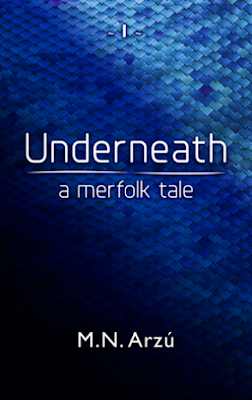 Hey everyone. This week I finished reading this book that the author was kind enough to send to me. My first thoughts were that it was going to be another book about mermaids that I really had no interest in. Thankfully I am open to giving books a chance because this was nothing that I could have expected.
The whole book shoots between different points of view of all people involved in one event. Since there are so many important points of view I'll just give a summary of each persons goal throughout the book, instead of a summary:

A man walking along a beach one morning finds a man washed up on the shore with severe wounds to his body. The man calls police but notices that something about the man isn't right. Before he is taken away he takes a video with his phone of the half man, half fish, he found. From here the story takes off.
The 'Merman' is then quickly passed into the hands of scientists who quickly try to determine what he is. Among the scientists there is a rift between wanting to do anything they can to get information on the creature and to protect it while he tries to recover.
When the video of the merman goes viral people from the media pick it up. But within the media there is a rift between those who are convinced it is a hoax and those who believe it to be real. In order to find the truth they will have to go to all of the sources to get their information.
In the community of Mermen, hidden from the world, the top members come together to figure out what they are going to do. They know they have lost one of their own and that there is a small possibility that they could get him back. Their decision will affect the family of the man, who want to stop at nothing to get him back.
And finally there is the merman. Waking up in a strange lab, surrounded by the very people he wanted to avoid. They know his secret and he doesn't know if his family will risk coming to save him.
This is the story of how different people handle something supernatural suddenly revealing itself into society. Each person will interpret the information they are given differently. The outcome will depend how each person handles the situation presented to them.

Overall a pretty good read. It's nice to read something that is, at its core, a supernatural type of book with scientific standpoints. It's not just one story. Each character had an important part to play in the outcome of the story. The author wrote this book very well.
Pace: B-
Plot: B+
Setting: B
Characters: B+
Ending: B
Overall Rating: 3 out of 5 stars
Have a great day everyone and happy reading!
- K
Amazon Book ksteenbookreview M. N. Arzu Review Teen Underneath a merfolk tale