The Sweet Oil of Vitriol by Daniel Eagleton 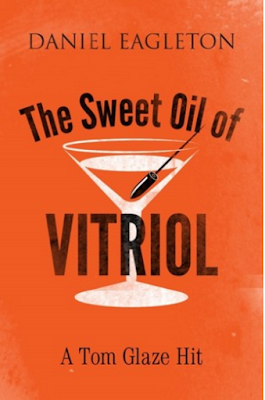 Hey everyone I hope you're having a good day. I missed last week and Monday due to my crazy work schedule. In the future, until I get some time off, I'll be posting a review whenever I finish a book and get time to write it.
This book was sent to me by the author. I literally knew nothing when I started reading the book so I didn't have any expectations. But once I started reading the book I noticed a few problems with it, but I'll get into that a little later. The basis of the story is that it's a man, a spy, trying to assassinate because it's what he's been trained to do.
Let me tell you what it's all about:

Thomas is probably the worst spy in the world. From the very beginning he messes up the one job he was given leading to him being hospitalized when his job eventually fails.
His old boss, who himself has been fired for his participation in the failure, creates his own business with his old contacts. Feeling sorry for Thomas he decides to give him a job that requires him to go undercover for half a year in a hotel. Thomas accepts because he has nothing better to do and he has waited years to do his job.
He starts his job and for a while everything goes as planned. But as always Thomas, the spy who is so dedicated to his job, gets distracted by a woman. Soon he messes up again severely jeopardizing the job.
And so it goes on as Thomas's life and job continue to spiral downwards. So many times he makes crucial mistakes that make you wonder what he had been trying to accomplish in the end.

Where do I start with this book. Many times during the book I questioned why a scene was being played out. It didn't add anything to the plot and later it turned out that there was no connection to the plot at all.
I also had a lot of problems with Thomas. How could someone who has been trained in everything necessary to be a good spy/hitman mess up so many times? He constantly allows his emotions to rule every decision he makes without thinking it through properly. We can't do the job at the hotel properly, let alone be a spy.
But this isn't to say the book is entirely flawed. The concept is a good one. And judging by the description of the book I would say the Author had a very clear idea of what they wanted of their book.
The dialogue was also well done.  The locations and the situations the characters are put in lead to a somewhat realistic dialogue. It's worth giving a read to really decide for yourself whether or not it's a good book.
Setting: B-
Plot: C-
Pace: C
Characters: B-
Ending: B-
Overall Rating: 2.5 out of 5 stars
Have a great day everyone and happy reading!
- K
Amazon Book daniel eagleton ksteenbookreview murder Review spy Teen the sweet oil of vitriol