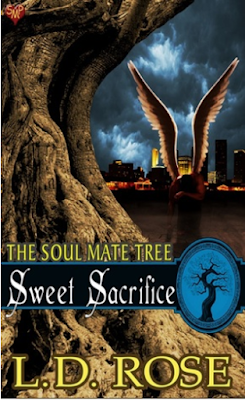 Hey everyone. Sorry for the late review on this one. I had meant to have this done for Monday morning but I had a very busy weekend taking care of an injured baby squirrel. But it's with the humane society now so I have time to write the review. The book came out just last week so I haven't missed the boat by too much here.
I've already read and reviewed two other books by this author that have no connection to this one (as far as I can tell). It is also one in a series of other books, according to Goodreads, but they also don't have any connection. So it is a standalone book in a series with the same general name, The Soul Mate Tree.
Since this is the one I read, let me tell you a bit about it:

Sebastian, Bash as others call him, died when he took a grenade to save his comrades. He was pulled from purgatory by the Archangel Michael to join the angel army in fighting the demons and all they stand for. And for a time he does his job without complaining, much.
It isn't until he runs into his wife on Earth that he starts having problems with his new life. He is drawn to her with more force than he was as a human. But the laws are strict about human and angel interactions. He is never to see her or risk having his wings torn off and being sent back to purgatory.
But that won't stop him. He will stop at nothing to return to her side, even if only for one night, to hold her in his arms again. To do this he will have to work harder around the angels to divert suspicions. Even in a perfect world there are always forces working against him.

This was a pretty good read. As always the author does a fantastic job at working the characters around a beautiful setting. The relationships between Bash and his wife are well worded and packed with emotion.
It's a short read so certainly worth checking out. I will put links of where to find it bellow.
Characters: A
Plot: A-
Pace: A
Setting: A-
Ending: B+
Overall Rating: 4 out of 5 stars
Have a great day everyone and happy reading!
- K
Click here to buy the book on Amazon!
action Amazon Angel Book fight ksteenbookreview ld rose Review romance Teen