The Vampire Lestat by Anne Rice 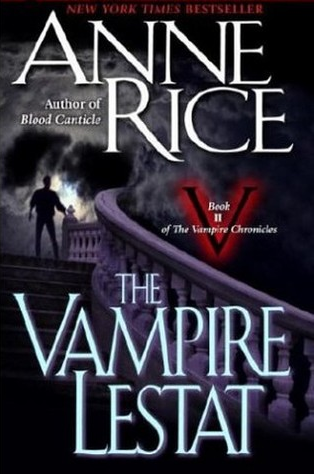 "My beloved Louis." - Some random page that I can't find because I read the ebook version...

The Vampire Lestat was a hilarious and thoughtful sequel to Interview with the Vampire. The best part about the book is that it acknowledges that the first book was written and published in its own universe. Learning what really happened to Lestat gave me a better appreciation for him, and it is nice to see what happens next instead of constantly being stuck in the past. Let me tell you a bit about it!

Lestat has been underground for years without food, attempting to end his life because he could not adapt to the changing world. He is ready to give up everything when he starts to hear a strange sound coming from outside.
A rock band has started practicing across the road from him and, believe it or not, Lestat wants to be a part of it. His thoughts go to joining with them and singing for them, but he is stuck underground. He finds his way to the surface after a month or so and spends a couple of days getting used to the new world.
When he does get around going to the band they laugh at him, saying there is no way he is Lestat. Lestat was a vampire in the book Interview with the Vampire.
Lestat is of course horrified to read Louis' tale of his past and decides the only thing he can do is write his own story. He knows that once it is published he will be hunted down by all Vampires for exposing them to the humans, but he doesn't care anymore.
So Lestat starts to write, telling of his time starting when he was about 12 years old and hunts down a pack of wolves all alone. His story takes us through his life growing up and his time trying to escape from the rest of his family, except his mother who he loved more than anything.
He ends up leaving with a good friend of his for Paris where he takes up acting and singing to make money. He is having a happy life until one day he is snatched away during the night by a vampire wishing to make him like himself.
Immediately after turning Lestat into a vampire he kills himself, leaving Lestat with many questions and chests full of gold. Lestat takes to attempting to blend in with humans until eventually he returns for his mother before she dies.
The rest of the story is what he does in Paris through the years, eventually leading to Louis. But I won't spoil it all for you. The rest of the story you have to find out for yourself.

I loved the story because I got to see another side of Lestat that isn't shown in the first book. It proves that a few things Louis thought to have happened had a very good reason behind it. Lestat kind of skips over most of the story with Louis, which was really why I read it in the first place, but the things he does remember are worth reading.
Lestat actually has a past with Armand and many of the other vampires seen in the first book, and a lot of the ending I found to be very unexpected.
All in all though the writing was good and I really got a good feel for Lestat after knowing what really happened to him.
I will give the book a 4 out of 5 star rating.
Have a great week everyone and I will see you all again on Wednesday!
- K
Anne Rice Book Book 2 Interview ksteenbookreview Lestat Review Teen Vampire