The 5th Wave by Rick Yancey 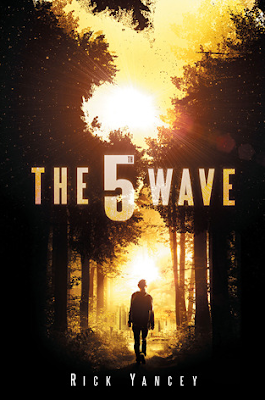 Good morning everyone, I hope you are all doing well. I am on a path it seems writing reviews for books that have become and/or are becoming movies. I never really watch the movies so I can't give a proper comparison for both but I can give you a proper review for the book.
I literally knew nothing of this book going into it so I didn't have hopes for it to be anything besides another teen book. I was really surprised at how much I enjoyed the first half of the book.
Let me tell you a bit about it:

Cassie lives an awful life as far as she is concerned. An alien race she calls the 'Others' have come to Earth and killed off almost all of humanity in a series of 4 waves.
The 1st wave knocked out all electronic devices including cars, killing only a few hundred thousand people world wide.
The 2nd wave sent a tsunami that killed everyone living in coastal cities.
The 3rd wave was a disease that wiped out 90% of Earth's population leaving only those who were naturally immune to the virus to pick up the pieces.
The 4th wave was the worst of all. With a new threat now lurking in the minds of everyone else it is impossible to know who to trust.
Now the 5th wave is coming and Cassie, who has been on her own since the 4th hit, has no idea what it is. All she knows is that she made a promise to her brother on the day they took him away from her and she is going to do everything in her power to keep it.
What Cassie doesn't know is that she is being stalked by a Silencer, someone who wants to wants to silence her once and for all. Can she unwittingly charm this Silencer into sparing her life, even if it means getting close to the enemy?
From another point of view a young man wakes up after nearly dying from the 3rd wave only to be confronted by a group of scientists who try to explain to him about the 4th wave. He finds out what the aliens really are and joins an elite team being trained to eliminate the threat. But what he doesn't know is that the aliens are a lot closer than he might think.
Follow Cassie, Zombie, and Cassie's brother as they try to find their own way in this new and constantly changing world.

Like I said before, I really enjoyed the first half of the book. When reading from Cassie's point of view I love learning how someone at her age is handling the fall of society when she can trust no one but herself.
The reason I say the first half of the book is better is because Zombie and Cassie's brother's point of view, while offering a different look on other crucial events happening in the book, don't really show you what it is like to be alone and have to struggle to survive while being hunted.
The characters, as I mentioned, were well designed and the constant shifting of perspectives gave a great outlook on how the world has truly gone to hell. The plot is fast paced, which is nice since it is a pretty thick book.
I would probably give this book a 4 out of 5 stars.
Have a great day everyone and happy reading!
- K
action alien Apocalypse Book ksteenbookreview post apocalyptic Review Rick Yancey romance science fiction Teen the 5th wave