By The Hands of Men Book Two: Into the Flames by Roy M. Griffis 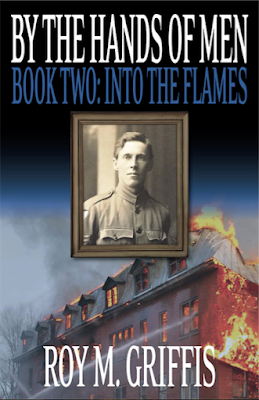 Hey everyone I hope you are having a great Monday. This week, as promised, I have found the time to finish a book and do a review. A while back you may remember that I did a review for book one in this series. Normally I don't do a review past the first book in the series but in this case I am making an exception. I love history and historical fiction. The first book dealt with the First World War and this one deals with the battles that went on after.
I was lucky enough to have the opportunity to read this book and I will be reading the third book as well. But let me tell you about this book:
Warning, if you haven't read the first book this will spoil the ending.

The Great War has ended but for Charlotte the battle still rages. Her loving soldier, who had asked her hand in marriage, had forgotten all about her after nearly dying of influenza. Having nothing to hold her in Europe anymore she takes her broken heart and heads home to Russia. On her way there she is taken hostage by the Russian Army who are killing all who they see to be betrayers of the revolution. The only thing that saves her is her kindness and position as a nurse during the War. With bodies piling up around her Charlotte will have to find her strength through the pain of losing the love of her life.
Robert is suffering from a broken heart that he blames on himself. After suffering from influenza he had forgotten the love of his life for a brief moment driving her away from him. When he had finally realized what she had meant to him it was too late. News that she had been killed on the train back to Russia brings him pain in more ways than the war had. Now he is throwing himself into his work in the army. He leaves Europe for China to keep an eye on the Russians who are threatening to take over the Eastern world.
Two lovers, both believing the other to be lost, are now thrust further apart across the world. Will there be any chance at them coming together again? Both will face challenges that will change them in ways the war never could.

I enjoyed this book. The author, as always, has a strong voice for both characters. I like that each Chapter changes points of view to give equal parts to the story of Charlotte and Robert. Since each story shows the difference that each part of the world are handling the aftermath of the end of the Great War it offers more than just a typical love story. If you love history you will love these books.
Characters: A-
Setting: B+
Pace: B
Plot: A
Ending: B
Overall Rating: 4 out of 5 stars.
Have a great day everyone and Happy Reading!
- K
Amazon Book Book 2 by the hands of men fiction historical fiction History into the flames ksteenbookreview Review roy m. griffs Teen War