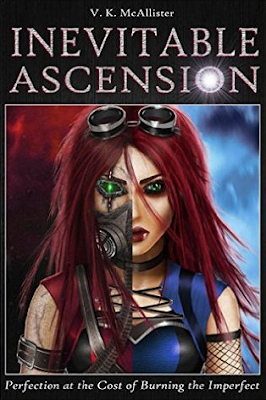 Hey everyone, as promised here is the review that I didn't get a chance to finish last week. The author was kind enough to send me a copy that I spent the last couple weeks reading.
Going into this book I wasn't sure what to make of it. My thoughts were that it would be a classic science fiction book with time travel but I wasn't sure what the story really was going to be about. It took me a couple chapters to get into it and to really understand what is going on.
Let me tell you a bit about it:

Violina and her friend Lux are not your ordinary hunters. For years they have hunted creatures to earn themselves enough Platinum to get by. But when they are betrayed by their employers they decide to strike back.
Since both are skilled fighters it isn't hard for them to take what they want; the last younglings of an extinct predator. Once they get away with them they are tasked with trying to find someone to buy them. If they can make a couple thousand Platinum they will be able to pay back their debts and continue working without worry.
Eventually, by accident, they find a very strange woman who offers to pay them more money than they could have ever hoped for. Happily they sell the creatures and prepare to spend the rest of their lives in happiness.
But things are never so simple. The strange woman kills a man leading to the guards believing that it was the girls. As they make their escape they run through a strange hole in a wall, which leads them to the past before the Second Sun rose in the sky and the great villain Kza was defeated.
While there they try to follow the events that history had laid out for them so not to ruin the future. As Violina takes her first life she ends up on an unstoppable path through time lined with the blood of those who defy her. With Lux along for the ride they decide that, instead of maintaining the present that they know they will change the past and everything else that is to come.
Two girls with a strange power to travel through time find themselves falling downwards on a path of death and destruction. Who would have thought two girls with a couple of guns could cause so much damage to all of time?

I think what I realized after a few pages was that instead of questioning the creatures, machines, and futuristic devices it was easier just to continue reading as though you already knew what it was. Instead of wasting time trying to relate it to something we know it is easier just to move on.
One thing I loved about the book was the way the characters were written. The conversations between Violina and Lux perfectly suit the confidence that the authors gave them. Instead of having the typical weak characters we are instead given a strong female lead that literally doesn't take anything from anyone.
One thing that bothered me a bit was that a lot of the time in the story the characters told you what was going on instead of the author showing it through the writing. When talking to popular authors they always say that it is better to show instead of tell. By telling it gives the readers the feeling that they are taking them by the hand and guiding them through the story. I personally didn't mind this because I was often confused. But it would have been nice to figure some things out on my own.
Here is my rating of the book...
Setting: B
Plot: B+
Pace: B-
Characters: A
Ending: A-
Overall Rating: 4 out of 5 stars
If you are interested in purchasing this book you can find it at this link:
Amazon Book Link
Have a great day everyone and happy reading!
action Amazon Book Inevitable Ascension ksteenbookreview Review Teen thriller V. K. McAllister