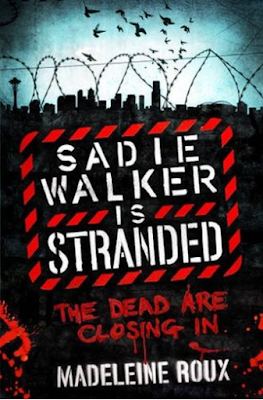 Hey everyone. I hope you are having a good Monday. Since we are now getting a butt load of snow it makes for the perfect time to do a lot of reading. Even with all the school work I have to do I'm managing to get in a few books here and there.
For the longest time I haven't been reading second books in series because I don't have time to read them. But now that I am stranded on campus for long hours without my laptop I've been taking the time to catch up on all the books I haven't had time for in the last little while.
This is technically the second book in the series, the first of which is called Allison Hewitt is trapped. I did a review for this book probably over a year ago. At the time I knew this book was from a different point of view with a different story. But because of the first couple chapters I read I decided I didn't want to read it at the time.
Now that I have read it I remembered how much I enjoyed reading the first book.
Let me tell you a bit about it:

Months after the zombie outbreak that was described in the first book, Sadie Walker lives in a walled off city near the ocean. She works as an illustrated to make money to earn food for her and her nephew who has lived with her since the beginning of the outbreak.
One day, when she returns home, she finds that her boyfriend has sold her nephew to kidnappers. When she tries to stop them he attacks her leading to her accidentally killing him and passing out. When she wakes up her nephew is gone and her friend from the pharmacy is tending to her.
There won't be time to find her nephew, though. A group of people have tried to escape the city by breaking through the wall. This allows all the dead that had been gathering there for months to break in and infect the city.
She tells Sadie that a friend of hers has a boat they can use to escape the city. On their way there she'll find the people who kidnapped her nephew and get him back. But there problems are far from over.
They have to fight their way through the infected population, and those quickly becoming infected, to make it down to the docks. Even there, the masses are gathering trying to get out to sea using any means necessary.
When they do make it out to sea they think they are safe. Beneath the waters lurks a threat none of them could have predicted.
Suddenly stranded on an island they have to learn to survive all over again. Spending most of their lives behind the walls of the city they don't know how to properly fight against the undead. They have to get food, make weapons, and find shelter.
But there are worse things out there than the dead. Lurking in the trees on their small island something is hunting the living. When you're trapped on an island there are only so many suspects. Who will Sadie be able to trust?

All in all I enjoyed the book. I managed to read the whole thing in about a four hour period between classes. A quick read, an enjoyable read, and a powerful storyline made this book great. I ended up rereading the first book again to remind myself of where it all started.
The author actually did a better job in the second book at developing relationships between the characters. There is a great depth to the knowledge that the characters have and use to help themselves in this survival situation.
Plot: A
Pace: B+
Characters: A-
Setting: B
Ending: B+
Overall Rating: 4 out of 5 stars
Have a great day everyone and happy reading!
- K
action adventure Amazon Apocalypse Book family Horror ksteenbookreview Madeleine Roux Review romance Sadie walker stranded Teen thriller Zombie