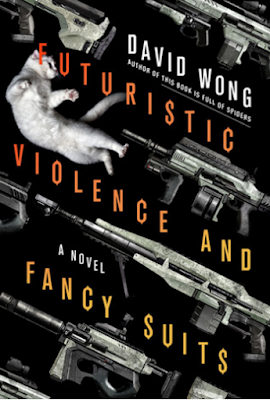 Hey everyone, I hope you're having a good Monday. For the longest time I have had this book sitting on my shelf, too intimidated to read it. Many of you may know how much I love David Wong and his book series John Dies at the End, which I wrote 5 star reviews for every book. This isn't from that series but has the same sort of humour.
I finally picked the book up again to read in between classes. What started out as just reading a few pages while waiting for the prof to finally show up turned into secretly reading under my desk instead of paying attention to lectures.
I finished the book in two days but it took about 12 hours total to read. Where I can normally skim read a book in a couple of hours I couldn't skim a page without missing something incredibly funny. But all the time spent reading was well worth it.
Let me tell you a bit about it:

Zoey Ashe lives in a trailer park with her mother and cat Stench Machine. She isn't your typical hero of the future. In fact, she never goes looking for trouble. Instead, she would prefer to stay in her PJs going out in her self driving car only to pick her mom up from the Topless bar where she works.
But for Zoey an adventure comes looking for her in the form of a man looking to eat her for fun. In a world where cameras are everywhere, in your glasses, watches, hologram phones, and suits, there are people who stream everything they do for their audience to watch. In this case it is a man with an entirely metal jaw specially made to bite through flesh.
This isn't just a random act of media violence, though. There is a bounty out on Zoey for more money than she's ever seen. This is all explained to her by a strange man on her holograph phone as she flees from the many people trying to kill her.
She finds out that her Dad, who she only met a handful of times, had passed away. Zoey only ever knew him as a pimp and a drug dealer who once tried to buy her love with a fancy car and a football. But what she will find out when the travels to the city that he owns will shock her.
Thrust into a world of money and power she will be forced to fight for her life and that of her smelly cat. But she isn't alone. She is joined by her fathers business partners who may have motives of their own for helping her.
With her group of associates by her side she will have to figure out who she can trust in a town full of people who are fake.

I loved this book so much. From the smelly cat the hero in PJs I just wanted to keep reading. The characters were created perfectly with widely different personalities. In many ways the characters in the book were similar to those in John Dies at the End with immaturity and seriousness being mixed about. Mr. Wong played on different stereotypes to create a comedic group of people to be around the main character.
Characters: A+
Plot: A-
Pace: A
Setting: A
Ending: A
Overall Rating: 5 out of 5 stars.
Have a great day everyone and happy reading!
- K
adventure Book comedy David Wong funny future futuristic violence and fancy suits ksteenbookreview Review Teen thriller violence