Showing posts from May, 2015
Show All

May 27, 2015
Good Morning everyone! I hope your week is treating you well. Lately as I have been browsing different book stores I noticed that a lot of people have different style of reading. We all know that people like different types of books, and with those books there are different ways people like to read. I notice that depending on my mood I also read differently. There are some days where I have the whole day to myself so I will put on some calming music and read from the moment I wake up to the moment I nearly pass out from hunger. Listening to music is sometimes distracting to some readers while to others it sets a mood for the story being told. Another way to read is on the go. When I have a lot of work to get done or I am watching a movie or TV I tend to take a small break to read a chapter or two. The most effective I have found while watching movies on the TV is to read during the commercial breaks. For some people who are really busy this allows for a nice break from working. For
Post a Comment
Read more

John Dies at the End by David Wong 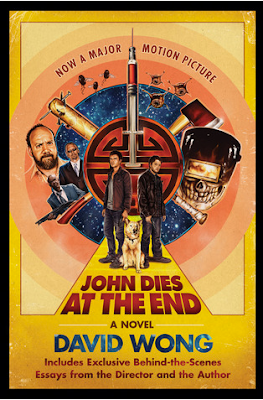 “So I just shaved half of the dog. I think she wants to look different when she is coming and going. That is one weird dog, David.” – John high on Sauce (this is not a direct quote because my book is out of my reach at the moment but I remember this sentence pretty well) Hey everyone! I hope you are having a good Monday. This week I read John Dies at the End by David Wong. This was recommended to me by my roommate but I was hesitant to read it because it was in the horror section. Often times I try to avoid reading horror books because they freak me out. Boy am I glad that I decided to read this one. I was not prepared for the hilarity and nonsense that the book puts forward. David Wong (the character in the book, not the author) is sitting in a small restaurant waiting for a reporter to come to interview him. When he arrives he prepares to tell him a story that is just as hard to believe as it is impossible. We are taken back to the night it all began. At a gig for their b
Post a Comment
Read more 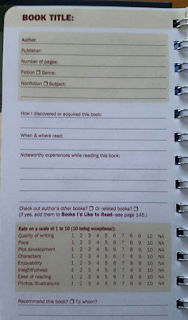 Hey everyone! Last week my mom and I went into a local bookstore in the area and saw this book: The Book Lover's Journal. Of course, at the time, I had no idea what it was. When I took it out of its wrapper to get a better look at it I realized it was just what a reader like myself needed.  There are several different sections, the first of which is depicted in the image above, dealing with books that you have read. There is a section for who you have leant or borrowed books from, what authors you liked, what books you have read and how you rated them. I have started using it for the blog to help get my information together better before writing a review. I am not sure if it is available at other bookstores (I haven't got a chance to look yet) but I am sure amazon.com would have some available if nowhere else. As you can see in the picture of the cover there is also a bookmark to mark your place. There is also a section on the other page of the one shown for notes on what
Post a Comment
Read more

Kitty Hawk and the Curse of the Yukon Gold 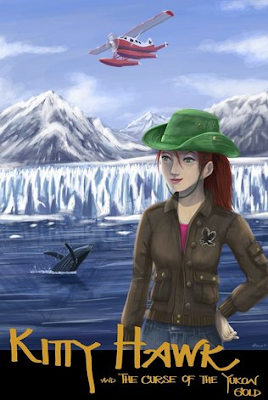 “This is dedicated to people who like a book to have a dedication page” – Dedication Page Good morning everyone. This week I read Kitty Hawk and the Curse of the Yukon Gold. This was sent to me by someone wanting me to do a review and after a long time of reading and writing a few things down I think I am ready to write the review. It shouldn’t have taken me as long as it did to read the book, as it wasn’t all that long, but I have been so busy that it kind of took back burner until I had time. Either way it is done now and I am able to continue on. Kitty Hawk is a high school girl living on the West coast of Canada. At a young age her father taught her how to fly a plane and since she has gotten a plane of her own. Now that the summer is coming Kitty has plans of a trip up to Alaska for the summer to observe the feeding patterns of Humpback whales in the area. After being sponsored by a local clothing store Kitty is ready and on her way to the north. As soon as she arriv
Post a Comment
Read more

The Secret to Enjoying Reading

May 13, 2015
Over the years I have wasted a lot of time going on websites and standing in stores trying to find the next book to read that suites my needs. I read some good books and some back books but in the end they all started to sound the same to me. As it turns out I was spending a lot of my time trying to find books that were exactly the same as the ones I had read before. This is not a good habit for good readers. A good reader needs to be able to read all different kinds of books to really know what they like. And a true reader must be able to read a variety of different books instead of only one genre. That is why I have been pulling out of the Young Adult genre just a little bit. The secret to reading, which is hard to do at first, is to simply grab a book and read. To be able to do this is something that many people will have to figure out on their own. Sometimes it is a book that is recommended to you, sometimes it is a book with a cool title, maybe even a great cover. But the only
Post a Comment
Read more

Charlie and the Chocolate Factory by Roald Dahl 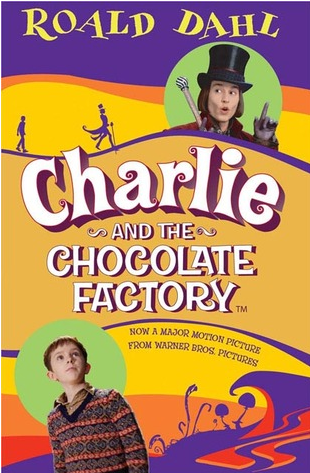 Hey everyone. This week I am back with another review as I am every Monday that this time I went back to my childhood a little. I remember always watching Charlie and the Chocolate factory with my dad, and way before that watching Willy Wonka and the Chocolate Factory. After all of this time, and because I had a little extra time on my hands, I decided it was time to read the book. I know there is a second book to the series as well, I just found this out after reading the first one, but I am not going to read that one because frankly it doesn't relate to the movie and I don't care all that much. As many of you will know Charlie and the Chocolate factory the movie has been a huge hit even before it came out as a sort of remake of Willy Wonka and the Chocolate Factory which came out many years before. After reading the book I found that the newer version actually stayed much more true to the story, although they did add in some Daddy issues which were never mentioned in the
Post a Comment
Read more

Jessica's Guide to Dating on the Dark Side by Beth Fantasky

Hey everyone, this weeks book was Jessica's Guide to Dating on the Dark Side, which is quite the mouthful if I do say so myself. This book has been pushed at me from all my sites, my bookstores, and basically every advertisement I have seen on books. The ratings were high, so I suppose I had my hopes up going into the story. Big mistake. The book was very rushed I feel, the main story almost being thrown violently at you. Let me try to explain it. Meet Jessica, duh, who is waiting for the bus when she notices a strange man watching her. He says her name, but not the one that everyone knows. He says her old name. OMG, what? Her old name? Apparently she knows that when she was a baby she had a name, that her adoptive parents told her about, but now she has a new name. Not even an hour later the guy shows up in her class, acting all high and mighty, and clearly knows nothing about high school at all. Jessica, being a big baby, calls her mom to take her home because she thinks
Post a Comment
Read more

May 06, 2015
Good Wednesday everyone! As usual I am doing an update for you and giving all of you readers out there a little advice. For those of you who haven't heard of it yet there is a brilliant website called Goodreads.com you can go to if you are a reader. It is free to sign up and there are endless amount of things you can do with it. Here you can rate books that you have read, add them to you read lists, research other books and read reviews written on books you have yet to read but are thinking you may want to. This is a great way to have books suggested to you and to find your next favourite read. But there are many other things you can do on this website rather than just add books you have already read and read reviews. One great section on it is the giveaways. If you have an account and can't find this setting here is what you do. 1. Log in to you account and go to the HOME PAGE 2. From here you should see a task bar on the page out beside the search function 3. Click on
Post a Comment
Read more 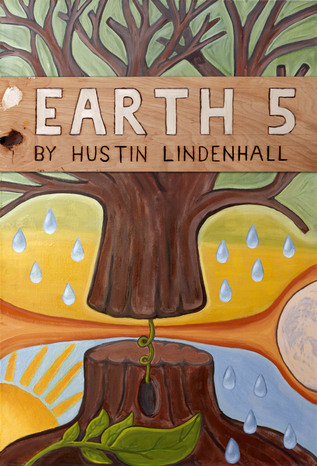 Good morning, afternoon, evening and night to you all! I hope your week is off to a good start. This week (which is really last week) I read Earth 5. At first I found it was a little hard to get into the story, but I found that after a few chapters I was really enjoying the story. That is the first thing you must know about this book.  Let me tell you a bit more about what to expect when reading: Hustin lives in a cabin on the hill behind his grandparents house. While his parents live far away he chooses to spend his time while not at school hiking the mountain paths around his cabin.  One day while on his hike he runs into a boy sleeping in the grass. The boy doesn't look like most boys his age. In fact he doesn't dress like boys his age and he doesn't even talk. Hustin isn't sure what to make of this strange boy so he invites him back to his cabin to eat a few apples from his grandmother's tree. Later that day a girl from school (who Hustin has a bit of a
Post a Comment
Read more
More posts