Showing posts from February, 2015
Show All

February 25, 2015
Hey everyone, sorry for the late post. To be honest I almost didn't have enough time to get to it today because I have been so close to finishing a side project. I decided that today I was going to focus all of my efforts of completing the first part which I have been working for two months straight on. It has really been getting in the way of my reading... Any way I thought I would let you know in my weekly update that I am, in fact, working on a side project that has nothing to do with reading, and that not all of my time will be devoted to the blog until I am finished. I will still be posting my weekly review and update but they might come late by a few hours or even a day or so depending on how well I am doing. I am planning on having it done in the next few months and once I have finished completely I will post an update showing you all the finished project. That's all I have to say for today! Have a great week and I will see you all on Monday! - K
Post a Comment
Read more 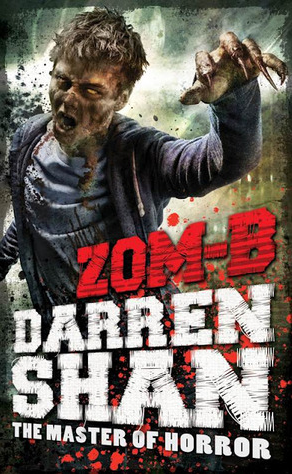 Hey everyone, back again. This week I found this book, and thought that because there were so many books in the series that I could get into it and have something to read for a little while. Boy was I wrong. What struck me right off the bat was that, despite the fact that the book was small, the print was large and centred in the page so that it took up so much room! And also, there were pictures in the book, not many mind you, but I have trouble trusting a series book about zombies when it has pictures in it. It made it feel more like a children's book than a teen to young adult book... The author also tries to throw in a lot of twists, but the way they end up happening leave me confused and thinking that he just made a mistake rather than actually being impressed.  B is a typical American whose father is a raging bigot, part of a modern KKK. While B does not wish to be like that, it is constantly seen that B is. And though B states that there is no relation like that it
Post a Comment
Read more

February 18, 2015
Happy Wednesday everyone! If you are in the northern hemisphere I hope you are keeping warm... Reading has seemed to slow down a little even though I am on a vacation of sorts. I have taken up a new hobby: Knitting!  But despite that I am still reading little bits at a time.  Lately I find with the winter I am feeling a little tired all the time, and reading is taking backseat to sleeping no matter what time of day it is. I know that this may not be the case in different countries, maybe where the sun shines more often, but here in Canada we are lucky to see the sun a couple times a week.  So because I care about your health let me give you all a few pieces of advice. 1. Although it is cold, going outside is important at least once a week. This means that you have to go out and do something. This doesn't count walking out to your car or running through a parking lot. Shovel the drive way or something, just get outside and get a little sun if you can. 2. Take vitamin D. This
Post a Comment
Read more

The Book Thief by Markus Zusak

Alright, I am back again with another book review. This week I decided it was time to read a book that I had heard good things about, and that I knew had been turned into a movie. I don't have any plans on watching the movie to this but that isn't unusual for me. Also it was recommended to me by my roommate who also loves to read so I took her word for it and went ahead to read it. What struck me right away was the writing style and narrative, which was from the perspective of death. Like in Good Omens, which I also did a review on, the narrative style of the book is very unique and the little notes that are put in every now and then give the book a more personal feel. Before I say any more it is important that I let you know what the book is about. Leisel has just moved in with her new adoptive family living in Germany in 1939. Her mother was to leave her and her brother (who dies on the train on the way there) with them so that they would be safer and have more than sh
Post a Comment
Read more

February 11, 2015
Good afternoon everyone, I hope you are all keeping well. I hope you are all working hard on your reading list or, if you aren't working on a reading list, that you are at least reading. I have recently picked up a few new books with one common theme: Vampires. It has been a while since I have read a good vampire book (one not meant to make teenage girls squeal). I picked up Bram Stoker's Dracula so that I can read a classic, and I will be reading Interview with a Vampire. I haven't seen the movie but I will most likely watch it after I read the book if I think it will be as good as everyone tells me that it is.  So far I am keeping up with the reading challenge, but I am struggling not to fall behind. Thankfully I will have a week off school to get ahead of my readings which means that I will have many more reviews to add on the coming Monday's.  Well that is all I have to update for today. If any of you are going to the Pittsburg Penguin game in Ottawa tomorrow ke
Post a Comment
Read more

Hey everyone, as promised I am back with a review of Good Omens. I absolutely loved this book! I was excited to read it before I got it online, and when I finished I went out right away to buy the hard copy simply to read it again. There are bonuses to having the hard copy but I will get into that after I do the description. So here we go! Crowley is a demon, or a fallen angel though the book states that he did not so much fall as saunter downwards, who has been given a task. He is to deliver the Anti-Christ to the hospital where he will be placed into the care of an unknowing human to raise until he is ready to bring on the apocalypse. He isn't so keen to this and seeks assistance from his best friend (?) Aziraphale (who we will refer to as Az because it is too hard to pronounce) who is an angel of the gates of heaven. It is an interesting relationship that is just far too funny to hate. They decide together that they must take care of the Anti-Christ and raise him so that
Post a Comment
Read more

February 04, 2015
Good day everyone, I hope everything is going well as usual. For my random Wednesday post today I will be talking about dreams. Not the dreams you have while you sleep, although this might be part of the case, but more like the goals you set for yourself that you picture for your perfect life. It is important to have these dreams because it gives you something to look forward to in the future. Sure, many people won't accomplish these goals but a lot of that is chalked up to either the fact that they set unrealistic goals, or that they give up trying to reach them because they figure it is impossible at that point. Well the truth is, it may be impossible if you stop trying but as long as you keep putting a foot forward and have a good plan there is a much better chance that you will someday reach it. Everyone should have a goal. Here is mine; I am still young, but when I grow up I want to live in a castle. Sounds stupid but hear me out. I am still in school. As soon as I begin
Post a Comment
Read more

No Safety in Numbers by Dayna Lorentz

Hey everyone, back again with another book review. Over the Christmas Holidays I had a lot of time to get some reading done. This was one of the books I had bought because lately I have been in the mood for some plague/apocalypse/zombie/sickness types of books. I have to say I surely wasn't disappointed when reading and I read the whole thing in one sitting because I was so excited to see what would happen. So let me give you a bit of background on the book. Four people have gone to the mall for a fun day of shopping. One is on his way to work, the other is shopping with her sister and grandmother, the other is with her workaholic mom, and the final one is simply there to buy something for school. But when one of them finds a bomb attached to the ventilation system all hell breaks loose. The mall is shut into quarantine and the shoppers directed to remain in one of the stores until they figure out what is wrong. After the first night people think it is kind of cool having to
Post a Comment
Read more
More posts