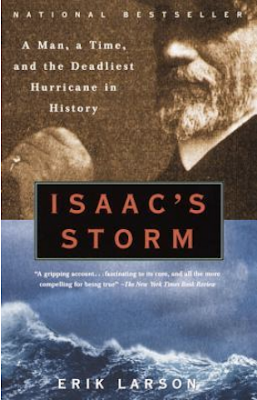 Hey everyone I hope you had a great weekend.
For the longest time I’ve had this book sitting on my shelf waiting to read it. When I moved it got lost in the mass of boxes until a couple weeks ago when I found it again (along with the rest of the books I haven’t read) and was able to put it back in the pile.
The first thing I’ll say about this book is that it’s by the author who wrote one of my favourite non-fiction books “Dead Wake”. After reading that book I ordered all the books by the author that looked interesting and this was one of them.
The theme of the book interested me because it involved a large storm that actually occurred and promised to show great stories from different people caught in the storm. I was really excited to get into it.
Let me tell you a bit about it:

In the year 1900 Isaac and his family are living in a coastal town in the South. He works for the weather institute helping to predict when storms are going to happen. He is joined in this by his brother who lives with him.
Due to apparent cover-ups in the agency it is said that a storm heading towards the town will be dangerous but not deadly. With a blackout of information coming from Cuba no one heard about how deadly the storm truly was until it hit.
When it hits it hits fast. People are unprepared for the flooding in the streets that becomes so high that it reaches the second floor on larger houses, despite being on stilts.
The book is told from different points of view from articles written by the survivors of the event.
Many lives will be lost in the storm leaving few to clean up in the aftermath.

The part of the story I enjoyed the most was the actual storm once it hit. There were many different people involved that we get to see fighting their way to survival. This and the aftermath, the people looking for loved ones and dealing with the storm, was the best part of the story.
That being said, the entire first half of the story was entirely boring. A lot of talk about Isaac and his family and politics within the town that, while it may be an important lead up to the storm, was easy for me to skim over. And while the book is about ‘Isaac’s Storm’ he is painted in a light that shows him more to be a liar that attempted to make himself look like a hero after the storm ended.
Since this book is a non-fiction book it is hard to give it the same rating system as fiction books. I’ll try to grade it on a different system.
Excitement: B
Pace: C+
Interest: B
Overall Rating: 3 out of 5 stars (The only reason this gets 3 instead of 2 is because the second half of the book was interesting)
Have a great day everyone and happy reading!
- K
Book Erik Larson Isaac's storm ksteenbookreview Non-fiction Review storm Teen thriller