Lost Amid the Cosmic Storm by Mike Phillips 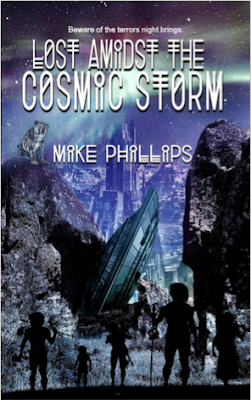 Good evening everyone. This review is coming a little late since I had to work a double shift today. In the past I have reviewed another book by Mike Phillips, which you can also find in my blog. I liked the last book he wrote but this one blew me out of the water.
Now, let me make this clear, this book isn't out just yet. This is an ARC that I received. I will send out another post announcing when the book actually comes out with a link to the page where you can buy the book if you are interested.
If you are looking for a book that explores the lengths humans will go to follow their beliefs, through an unknown landscape with endless amounts of danger, this is the book for you. Basically, if you love adventure fantasy books this is a great read.
Mr. Phillips has a strong voice in a way that I don't feel the author in the story at all. It flows so smoothly that it doesn't feel like you are reading it at all. After a few chapters I really got into the story and I read the entire thing in just over 3 hours. So it isn't an overly long read.
But let me tell you a bit about it:

On a planet, not that much different than Earth, a group of young humans move in a herd of large lizards called Bronti. The Bronti are the only thing that keeps these hunters from the dangers that lie in the world around them.
Though they are young, they have learned much in their years on the planet. They are able to fight off enemies that come their way. They can make medicine and food out of the plants they find in their world. But none of this is as important as their mission that was given to them by their parents before they were forced to leave them behind to go to safety.
Their mission is to find the Heavenly Vessels, which will take them away from the Horrors of the Night that are destined to hunt them down until they either find safety or are consumed.
Marquette is the young chief of the tribe trying to hold it together as things begin to fall apart. On the outside of the tribe the Man of Sorrows walks in silence, watching as a Guardian over the group. Marquette has to remain in his favour or risk not only losing his position as Chief but will also be severely punished.
Nothing is as tempting to him as a young woman in the tribe who he has grown very close to. As a chief he will have to decide which is more important, his position as protector of the group or his the young love he feels is right.
But in the night there are more dangers. The Horror of the Night are closing in quickly. New revelations show the group just how much danger they are in and how much they have truly lost. Will they finally be able to find the Heavenly Vessels as they were told or will the Horror of the Night catch up to them first? Follow Marquette as he faces off against the challenges in the world and finds out the difference between what he has been told all his life and what is truth.

I loved this book from the beginning to end. Fantasy is such a unique genre because it gives talented authors a chance to weave a new reality into being and place any number of different people in the crosshairs. Mr. Phillips does a fantastic job at taking classic human objects, stories, and tales and turning them into a masterpiece.
Plot: B+
Characters: A-
Pace: B
Setting: A
Ending: A
Overall Rating: 4 out of 5 stars.
Once again I will post another entry when the book is released with a link to where you can purchase the book if you are interested. Have a great day and happy reading!
- K
action adventure Amazon Book fantasy ksteenbookreview Lost Amidst the Cosmic Storm mike phillips Review romance science fiction space Teen