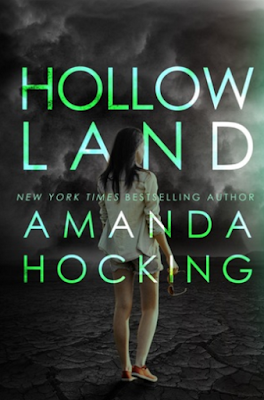 Hey everyone, I hope you had a great weekend. This week I started reading a book called UFO Files that I found at the bookstore for $2. But one thing I find about this book, which I haven't finished reading yet, is that it really makes me want to read other books. It's not that the book isn't good (it's alright) but there is something about the themes it talks about that makes me want to read a book with that theme. So because of that I ended up finding this book.
Amanda Hocking has a long history of writing books for the teen audience. I first ran into her books when I read her Switched at Birth trilogy, which I don't think I did a review for on this blog. Since I recognized her I thought I would give this book a shot.
The description of the book was very basic. It has the classic "girl in a zombie apocalypse trying to find someone she loves" feel. And there is something about a book set in the 'after apocalypse' centred around the apocalypse that piss me off. It feels lazy not to show the person in the situation as it unfolds and instead just have it already happen and throw them in halfway. But despite this I decided to read the book anyway.
Let me tell you a bit about it:

Remy is a young woman who has lived through one of the worst disasters the world has ever known; the zombie apocalypse. She is staying in a school with the rest of the survivors, being protected by the army. But when the army fails and the school is over run Remy is ready to take her brother and flee.
The only problem is her brother is in the medical ward. When she finally fights her way down there she finds out he has been evacuated to another safe zone to the north. So with the school compromised she sets out on her own to find her brother.
Along the way she is joined by a young girl, a Canadian medical student, and a bratty rock star with a gun. More will join their team but not all will make it their destination. All across the landscape there are zombies looking for people to infect. And the zombies are getting smarter.
There are secrets that Remy is hiding from her friends, leading to tension that will need to be solved before they get to their destination. And once they get there, Remy will find things are not what they have seemed.

In the end I think the book was okay. It was very cliche in the 'man falls in love with woman even though he starts off as a jerk' kind of way. It also plays on the 'I'm the main character and I'm the chosen one' kind of story. I think these concepts, which were so essential to finish the story, were what made the book less enjoyable.
That being said, the characters were well written with a variety of personalities that worked well together. The author did a good job keeping to a realistic sense of horror where it was easy to imagine a main character being killed off. I don't like horror stories that baby certain characters because the audience might get upset.
Plot: B-
Pace: B
Setting: A-
Characters: A-
Ending: B-
Overall Rating: 3 out of 5 stars
Have a great day everyone and happy reading!
- K
adventure amanda hocking Apocalypse Book family hollowland Horror ksteenbookreview post apocalyptic Review romance Teen thriller Zombie