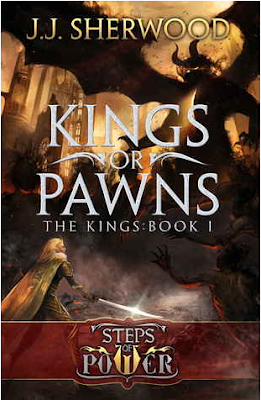 Hey everyone I hope you are all having a good Monday. This week I was lucky enough to be sent a copy of this book to read. It's about the size of an average book, just about 400 pages online but it is by no means a quick read. Like Game of Thrones or Lord of the Rings there is a lot of the lore and different species to learn about. Along with that there is also the add on of other worlds with even more people.
My first impressions of the book were that it was a little hard to get into. The cover of the book reminds me of Dungeons and Dragons, which I am a big fan. But as a player I know that there can be a lot to do before getting into the good parts of the story so I sort of felt that the book would be a little like that. I wouldn't say that feeling was far off.
But before I get into that let me tell you a bit about the book:

In the world there are only two real players: King and Pawns. If you are not a King... well, you know what you are. Even if you are a highly respected member of the King's guard in the fight against evil you are used to further the games the Kings play.
In their chambers where the Kings meet they decide everything for their subjects. They decide where they will send their best soldiers, despite where they might be or what they might be doing. They even decide whether or not their people will be allowed to vote for their own choices or whether they will make the decisions for them.
From the perspective of Jikun we can see the life of a Pawn. As a soldier for the army of the King he is commanded about the land to fight battles against the Beast of their enemies. From his point of view it is seen the ups and downs of life under the thumb of a King. We see the way he sees those above him and how his status affects him in the time of war.
From the perspective of Hairem we see the life of a King. From commanding his people, dealing with other diplomats of similar stature, and putting on a front so that he does not appear weak, he must deal with a large group of people during a time of war. With his father recently dead and him taking over the throne he has many new decisions to make. All the while he attempts to make his mark on his world while fighting with those around him for the change he believes is necessary to win the war.
But though the war seems to be in the favour of our heroes the world appears to be falling to pieces. In Jikun's world the creatures once easily hunted are now fighting back with fierce power. A strange eye is discovered in a cave. In the world of the Kings members of the council are being murdered by a mysterious foe.
As the counsel works against the people the King can't help but wonder if he himself is a Pawn. Follow these two men, as well as a few other characters mixed in, as they fight to win a great war, fight those who oppose them, and figure out where they truly stand in society.

The beginning of the book was a little hard to get into. At the same time I have a lot of respect for the author because there was a great job done in creating the landscape in the different worlds and developing an understanding of the different species living in them. It is much harder to explain a story as well as develop a history in a Fantasy novel than in a regular fiction novel. Very few Fantasy novels have a really strong voice right off the bat.
But the author did find their voice eventually and the story became much more interesting. This is just one of those cases where you need to have a good understanding of what good writing is and put that over what you want to expect from a story. J. J. Sherwood knew where the story was going and did a good job in creating an atmosphere that works the plot into a captivating story.
Plot: B-
Pace: B
Characters: B
Setting: A
Ending: B
Overall Rating: 4 out of 5 stars
Click here to go to the Amazon page to order your own copy of Kings or Pawns.
Click here if you are interested in entering a giveaway for a copy of this book.
Have a great day everyone and happy reading!
- K
action adventure Amazon Book Book 1 fantasy J.J Sherwood Kings of Pawns ksteenbookreview Review Teen