By the Hands of Men Book Three: The Wrath of Righteous Man by Roy M. Griffis 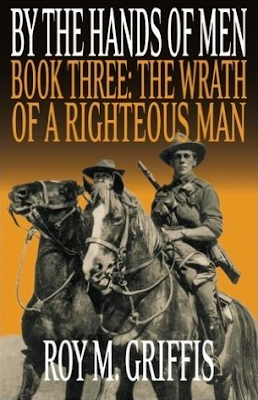 Hey everyone. I hope you are having a good Monday! A few of you might remember an eternity ago when I did the review of the first book in this series. I've had the third book pretty much since they time but I haven't had the time to read it. Finally I forced myself to sit down and finish it because I owed it to the lovely author who sent it to me to finish it. Well, now I'm done and ready to do the review.
As always I am absolutely blown away by how much research has been put into this book. The situations the characters are put in are detailed and well thought out. The author has clearly improved his already well honed writing style. For the series as a whole I was very impressed.
So far I've done the reviews for the first two books in the series, the links to these will be posted below.
So let me tell you a bit about it:

Now long since separated the stories of Charolette and Robert are slowly coming together. The First World War has ended but the battles still live on with the two as they fight in two very different parts of the world.
Robert has been serving the Queen by being stationed in China. Now he is being sent to Africa to serve in the army fighting against the Boers. At first slightly reluctant to join the battle again, after almost losing his life so many times in the War, he soon finds his place in the fighting. But Africa can't be the last place Robert stays. There is still so much for him to learn and he has to find himself, even if it means going to the ends of the Earth.
For Charlotte it seems the war will never end. She was lucky that the Reds chose to spare her life, even if fighting for them meant horrible treatment and months of starvation. She has fled from her captors with the hopes to find a better life outside of Russia. Along with those who have escaped with her she will have to try to make it in a world where War is everywhere and peace is hard to find. With all the hardship around her it seems like the man who proposed to her during the Great War is only a memory of a better time.

Reading this has given me a lot of pleasure. I have always loved world history especially surrounding the Wars of the 20th century. This trilogy has given a great inside look into so many wars and the people who have fought in all of them.
I loved watching how Robert matured throughout the series. In the first book he was so polite and well kept, but became more assertive and bitter as the books progress. I hope to see a thrilling conclusion in the next book.
I apologize for taking so long to get this book read and reviewed. But I'm happy I got the chance to read these books. I am looking forward to the next one.
Characters: B+
Setting: A
Plot: A
Pace: B
Ending: B+
Overall Rating: 4 out of 5 stars
Have a great day everyone and happy reading!
- K
Book One Review: Click Here
Book Two Review: Click Here
To buy this book click Here
action Amazon Book book three by the hands of men historical fiction History ksteenbookreview Review romance roy m. griffs Teen The Wrath of Righteous Man thriller War