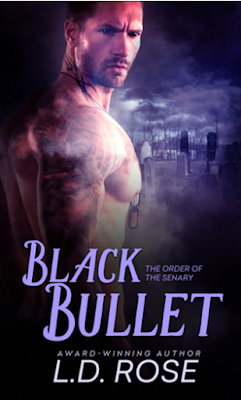 Hey everyone, I'm back again. I know it's been a while but now that I am back in school I am going to try to keep a more regular reading schedule. I won't be working so much so I'm hoping I'll actually want to read and write more often. And I'll start that by catching up on books I've read and writing the reviews for them.
This book is the second book in the series and has been sent to me by the lovely author. The review for the first book is on my blog if you are interested in checking it out. This book carries on after the events of the last book left off from the point of view of a different one of the brothers. It tells the story of one of the strange hybrids who was created by one of the brothers.
Let me tell you a bit about it:

John was known as the Black Bullet in his human days. He had been one of the lead FBI agents who worked alongside the Hybrid brothers when they were hunting the vampires that preyed on the human population in New York. That is, until the day one of the leeches he was hunting killed him.
His life was saved by one of the more powerful brothers by making him into a hybrid. But to be made a hybrid the vampire who created you needs to be alive. And that's the problem; John killed his.
That leads to even bigger problems when it seems that his creator may not be fully gone. His conscious is still holding on inside John's, slowly driving him insane. What's worse, his twin brother, a psychopathic vampire, knows it's him and will do anything to get him back.
Lawan is a deadly killer. Suffering from PTSD after being kidnapped by the deadly twins and sexually abused for years she spends all her time drinking, when she isn't out killing other vampires.
Her existence confuses the other Hybrids since she appears to be a hybrid herself. And everyone knows all the female hybrids were killed off in the beginning of the experiments.
The two will come together in the most unlikely of situations and will have to make the best out of what they have. John may not be able to fully trust Lawan, who may be ready to kill him at any moment. And Lawan will need to be able to learn to trust John if she hopes on ever escaping the nightmares that haunt her.

I really enjoyed this book. I liked that it took from the first book and added onto it by developing on other characters that I didn't know much about. You get to see the characters from the previous books continuing on with their lives without needing a whole story to explain it. The writing was professional and flowed nicely. If you enjoyed the first book I would certainly recommend checking it out.
Plot: A-
Pace: B
Setting: A-
Characters: A-
Ending: A-
Overall Rating: 4 out of 5 stars.
Have a great week everyone and happy reading!
- K
action adventure Amazon black Book bullet hunting ksteenbookreview L. D. Rose mystery Review romance Teen Vampire