Quarantine: The Loners by Lex Thomas 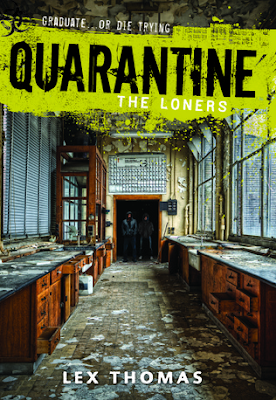 This book has been on my list for a very long time. I loved the idea of a story set in the setting of a high school where the children were not able to get out. It almost sounded like my high school experience, except I did eventually escape.
The author had a strong voice and told the story in a much different way than I expected. I had thought that it would start before the virus and then slowly make its way through what happens during and after. Instead the virus is mentioned briefly and the chapters skip ahead in time quickly to keep up with the interesting information.
Let me tell you a bit more about it:

David was having a bad week when he discovered his girlfriend cheating on him and he punched the man in the face bringing on the wrath of the entire football team. He tried to make the best of it since it was his brother Will's first day in high school but from the first moment he steps foot in the school things go from bad to worse.
An explosion rocks the school sending everyone into a panic. When David looks to his teacher for help he finds that instead of looking for help he coughs up blood and dies at his feet. Then the military swoops in and kills anyone trying to leave the school grounds.
The last thing they hear before they are locked in is that a virus had spread to the school and that the teens would kill any adult or young child that they got near. Then they are sealed in and forbidden to leave the halls of their high school.
Food is shipped in every couple of weeks prompting gangs to form from the different social groups in school. Those like David who have no group live on the outskirts of the school, fighting for his food and hiding away with his brother once he gets it.
The military sets up a booth to allow those who have been deemed safe from the virus (those who have finished puberty lose the virus and can be killed by it). So while some people leave the school into the unknown the rest of the school fights to survive.
One mistake leads to David and his brother being deemed enemy number one and two. Now David has to make drastic changes to the gang system to protect others like him from the most powerful gangs.
Soon David will be graduating and will have to leave his brother behind to face the real world. All he has to do is live until that day.

I liked that the time sped up to representing when interesting things were happening instead of going day by day. It have the story a more realistic feel since it would realistically take a few months for things to get to the level that they were.
I didn't like that the story kept switching points of view. I think it would have been more interesting to try to figure out what was going on instead of it constantly being told to you. Plus there were people I didn't think I cared about. Even just two points of view would have been better than four or five.
Story: A-
Setting: A
Characters: B
Pace: A-
Ending: B
Overall Rating: 3 out of 5 stars.
Have a great day everyone and happy reading!
- K
action Book deadly ksteenbookreview Lex Thomas murder mystery Quarantine Review Teen thriller virus Young Adult