Harry Potter and the Order of the Phoenix by J. K. Rowling 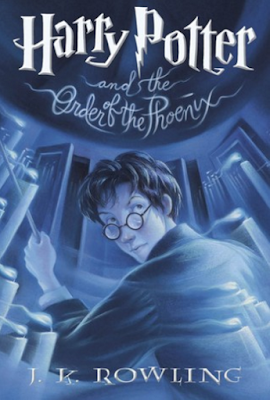 Hey everyone I hope you're having a great Monday. As you can see I finally got back into reading the Harry Potter series after taking a very long time off. It started off as a way to listen to a book while taking my dog for a walk. When that wasn't moving as quickly as I can read I broke out the books again. Needless to say it has taken up most of my weekend finishing the series.
I may have mentioned in the past that I'm not the biggest Harry Potter fan. I still don't enjoy the first couple movies but I've found myself liking the last couple ones more and more in the last couple weeks. My roommate has been a big help with this one.
Many of you have already read these books but for those who haven't, and have read the other books before this one, I'll tell you a bit about it:

Harry is having one of the worst weeks of his life, and that's saying something. He's been charged with using magic in front of muggles after saving his cousin from a pack of dementors. On top of that it means he will have to go in front of a jury at the Ministry of Magic. This wouldn't mean anything to him if they hadn't all turned against him after he claimed that Voldemort had returned.
Thankfully there are still people that believe him. In fact, an old order that had once stood up to the Dark Lord has returned, calling back its most powerful members to stop him. They work in secret, behind the backs of the Ministry to try to make a difference.
But Harry doesn't have time to concern himself fully with the workings of the Order. The Ministry has sent one of their own to fill the role as Defence Against the Dark Arts teacher. Professor Umbridge is every students nightmare. Not only is she completely controlling but she does not listen to reason and is, without a doubt, the most hated character in the series.
When she isn't trying to discredit Harry she's trying to overthrow Dumbledore to take his position for herself. Harry will have to do everything he can not to let her go through with her plan while trying to figure out what Voldemort's plan is.
Harry and all those who believe in him will arm up, ready for a battle that their parents faced before them. For Harry, more than the fear of the being hunted by the Dark Lord, he worries that he may lose the people who have already given so much for him to live.

This book had me captivated right from the beginning. The audio book I was listening to took so long to get through a single page that I couldn't help but read on ahead just to get to the good parts faster. While Umbridge as a character frustrated the hell out of me the love Harry gets from his friends makes it worth the pain.
I started out this series without much interest in finishing it. But now I'm excited to finally get to the last book where I know how exciting an ending it is going to be.
Plot: A
Pace: B+
Characters: A-
Setting: A
Ending: B
Overall Rating: 4 out of 5 stars.
Have a great day everyone and happy reading!
- K
action adventure Book fun Harry Harry Potter hogwarts J. K. Rowling ksteenbookreview mystery order of the phoenix Review Ron Teen Young Adult