The Martian by Andy Weir (As Recommended by Anna) 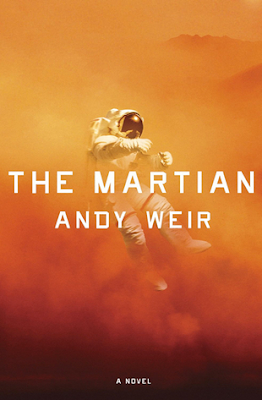 Good morning everyone. I hope you are having a good day. My old roommate recommended this book to me and since it recently became a movie (which I haven't seen) I figured I would give it a read. As always the biggest mistake I made going into this book was getting my hopes up. I partially blame Anna for this since she gave it a 5 star rating and said it was amazing. I think she just likes messing with me.
I'm sure many of you have either seen the movie or read the book but I will tell you about it anyway:
WARNING, THIS BOOK AND THIS DESCRIPTION FEATURE VULGAR LANGUAGE!

Mark is fucked. Don't freak out, he tells you this in the first sentence. How messed up is he? Well, he is stuck on Mars and no one knows he is alive. So yeah he's pretty fucked up.
But fucked as he is he isn't out of the game... not by a long shot. With his experience in engineering and botany (plant science in case I spell it wrong) he will try to stay alive for about 4 years until the next team is supposed to come to the planet. He is going to have trouble lasting a few days let alone 4 years.
Back on Earth the scientists at NASA have figured out that he is alive even if they don't know how to get him back or communicate with him. The people in charge are in a tight situation regarding the media, Mark's crew mates who are still in space on their way home with no knowledge of him being alive, and Mark himself.
The race is on for all parties to stay alive and escape mars. One team is under the pressure of saving a man in front of a nation when failing is not an option. Another is trapped in space without proper knowledge that their friend is alive. And for Mark surviving is the hardest challenge anyone could have to face... because he isn't even on Earth.

I think this book is best described as 40% plot/60% numbers. I'm no scientist and I'm not good at math so when most of the book is people describing what is going on it just goes over my head. Because of that I found the book a little boring.
The action scenes that you would expect can only come from Mark's point of view and in most cases you hear it after the fact because he is writing a journal. This leads to a lack of action throughout the story making the numbers even that much more annoying.
The character of Mark, however, is pretty entertaining to read. The concept of the story is original while banding science fiction and action (if you could really call it that) together in a way that makes nerds go crazy.
I can't give this book the full five star rating that Anna did but I wouldn't say that it was a bad book overall.
3 out of 5 stars, end of story.
Have a great day everyone and happy reading!
- K
action Andy weir Book ksteenbookreview mars movie Review science fiction space Teen the martian