By the Hands of Men: The Old World by Roy M. Griffs 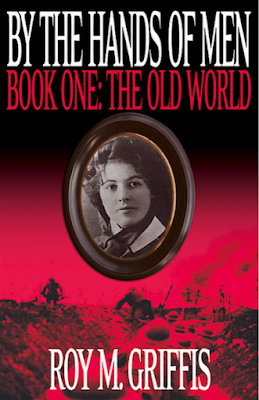 Hey everyone, I'm posting a little late today because... well, I don't actually have an excuse. I was eating McDonalds and then found a funny video online and well... I'm doing it now do there is no reason to go on.
A couple weeks ago I received this book to read from the very generous author. It is a Historical Fiction set in World War One from the point of view of a nurse working near the front lines. I love stories from War because they are part of our history and I think it's important to know more about it. This book was also great for me because we had just gotten to the part about World War One in my European History class (both of the ones I am taking).
But let me tell you a bit about the story:

Charlotte is a Russian nurse who has been working on the front lines since close to the beginning of the war. Her and her friend from America have been working hard and have learned many things while treating the wounded.
For a couple of months Charlotte is moved up to the very font line during the battle of Passchendaele, one of the bloodiest battles. While there she gets very little rest since she is working around the clock to save the wounded soldiers. If they die, she moves them out of the way and moves on to the next. Eventually she learns to see the wounded only as bodies and not as people.
The only person she sees differently is her Prince, Robert Fitzgerald, who had helped her on her first day there despite being injured himself.
When she is finally moved back to her original field hospital she is a different woman. She can't stand the new nurses, particularity a new English girl named Alice who is prissy and seems to have it out for her.
But Charlotte doesn't let it bother her. She does her job better than almost anyone else in that hospital.
She is surprised when she returns to find that Robert is recovering there as well. She begins seeing him regularly to teach him French and a young boy with an injured kitten English. She truly starts to enjoy her life at that point.
But the war drags on and life for Charlotte and Robert is about to get harder. There are forces trying to rip them apart internally and externally in the camp. War rages on. The dead continue to pile up. And sickness ruins those who manage to recover.
Charlotte will have to use all of her skills she has learned throughout the war to make until the end. But what will she do when she is finally free?

At first I wasn't sure how I would feel about this story. By the end, though, I ended up reading for 3 hours straight (even through class) just to figure out what happened. The story is thrilling, historically accurate, and shows the mental state of a young woman forced to endure the hardest thing any female could in those days.
My friend in Psychology wants to read this book specifically to see how the author depicts the changing mental state of the woman from before the front line work and after. This might be something you are interested in too.
Story: B
Characters: B+
Pace: B+
Ending: A-
Setting: A
Overall Rating: 4 out of 5 stars
Have a great day everyone and happy reading!
- K
action Book book one by the hands of men historical fiction ksteenbookreview Review romance roy m. griffs Teen the old world thriller War World world war 1